When I was thinking through this week’s blog entry I had a brief conversation with a parent who had stated they wanted to spark the curiosity of their daughter to learn how to code.  The parent was knowledgeable with technology so I immediately dove into the deep end with buzz words (Javascript, Python, Cloud Services, blah blah blah) but I quickly realized that is the dilemma.

Either you are just wading into the pool and are new to the world of coding and technology or you are in the deep end with a very comfortable, and maybe expert knowledge in all things tech.  In both cases, you may simply not know where to start when introducing coding to someone who is new to it all.  You may also feel pressured that a wrong step and you are doomed.

Second, read on as I do have some advice.  Scratch is your answer.

So, where do you start?

I firmly believe you want to begin using a tool that allows you to easily explore.  Sure, you can download a web development tool like Adobe Dreamweaver, Microsoft Visual Studio or some other cool tool some software developer friend or teacher told you about but your exploration will be hindered by trying to simply learn the tool’s interface and get basic rules down before seeing anything.

This may be a great exercise for a few but for most it can also be frustrating.  Don’t get me wrong, you will get there if you are persistent and these may be great tools to build solutions.

However, I am going to return to my driving analogy I used in a prior blog where I share a secret all programmers know.

When you were learning to drive, although it may be great knowledge, did you learn how the transmission and motor worked before actually driving the car.  Probably not.  You learned the basic controls and began driving.  You explored how it all felt and got instant feedback by jerking back and forth while stepping on the gas or break pedal.  An experience most of us never forget!

Scratch, which was developed at the MIT Media Lab, is a visual programming tool created for teens and others interested in learning to code for their first time.   Instead of typing lines of code as many of us who studied early programming languages, you are using graphical blocks that are snapped together.

This visual environment of learning to code has you quickly building software as it guides the user to only snap blocks together that make sense logically.  This approach allows for learning the logic of coding quicker. 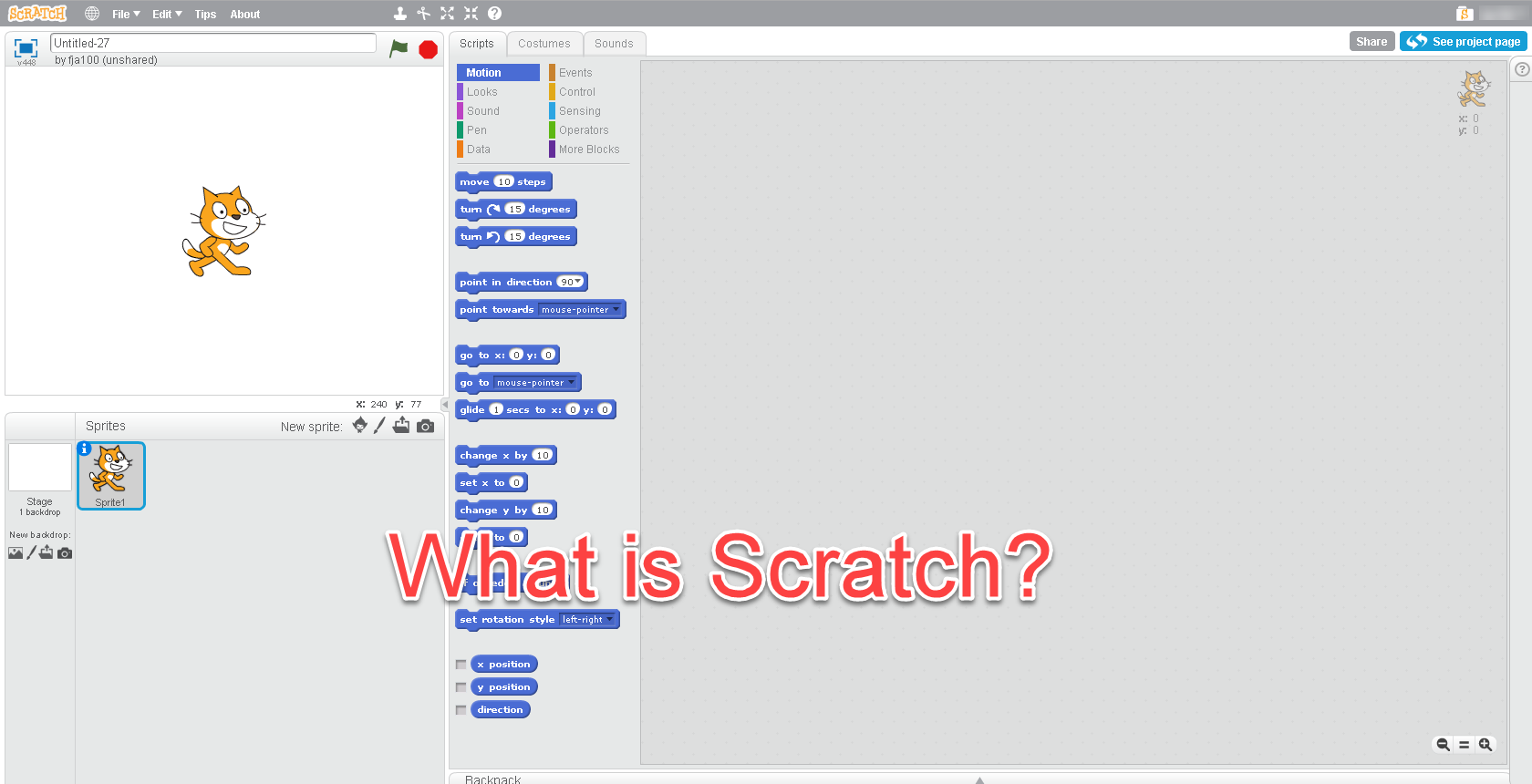 Scratch is an environment that allows you to explore and build with very little hand holding or training which is why I prefer it to other typed languages when learning to code.

Those will come later but this environment gives a foundation so that when you do go in that direction, you will easily make the transition.  By snapping together color coded blocks that represent different programming constructs (or rules) you can have fun and get instant feedback allowing you to learn quickly.

When first introduced around 2007, Scratch was software you would install on your personal computer.  Then as time went by it became available as a web based tool.  Being a web based tool means it can run it in an internet browser with internet connection.  Essentially, allowing you to learn anywhere.

This ubiquitous (eg. everywhere) means you can turn any space into a learning lab.  Now that is what I am talking about!

Anyone can learn to code.

An important thing to note is this fact.

The goal really isn’t to make everyone a software developer.

These skills are highly useful in any profession that requires thinking and well…that is pretty much all of them.  So, as we learn to write English and do math in our schools, we all did not become writers or engineers.  However, we learned to think and these tools helped us solve problems in our lives.  Learning to code in our era with the digital tools we have is just as foundational.

It will take you about 10 minutes!

Who doesn’t have 10 minutes to kick open the door to a much wider world with low floors and wide walls!

Try It
For Free

When you complete these coding courses, you will have a better understand of what coding can be.
Get Started - It's Free!

4 thoughts on “Why Scratch Is Great For Learning To Code”